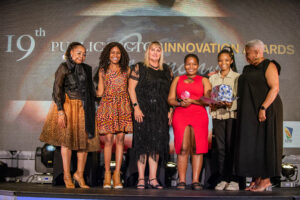 The 19th  Public Sector Innovation Awards aimed at recognising innovators in all spheres of government and public entities were held at the Birchwood Hotel, Ekurhuleni on Friday, February 25, 2022. 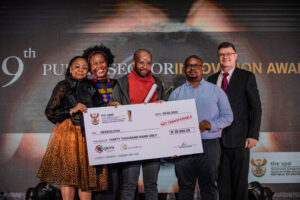 As part of the Awards, Minister Ayanda Dlodlo, Minister for the Public Service and Administration hosted a hackathon (PSIHACK22) to challenge youth to build solutions that will help accelerate service delivery in the public sector.  Hosted on 24 – 25 February, the Hackathon was jointly organised by the Centre for Public Service Innovation and Geekulcha.

The Hackathon saw up to 120 young innovators take part in conjuring up some solutions in health, education, job-creation and agricultural sectors.  Together with the Deputy Minister for the Public Service and Administration, Dr Chana Pilane-Majake, Minister Dlodlo opened the Hackathon on the morning of the 24th  of February with an address and a panel discussion facilitated by Mr Lucky Litelu, founder of the ICRD Group and the Startup Business Campus.

“A hackathon is more than just seeking and building new solutions, it is an opportunity to engage with the next generation”, said Minister Dlodlo. She continued to say that her address should be seen not only as the launch of an event but a launch of a 12-months span hackathon programme with a support structure towards the realisation of the solutions.

During the State of the Hackathon Address (SOHA) on day 2 of the Hackathon, Minister Dlodlo highlighted the need to ensure that users become the ultimate beneficiaries from hackathons. “Let’s normalize putting projects into the hands of the users after hackathons. Hence, after this speech, I will be writing code and launching an application that will let even the people in rural areas shape the next hackathons.”

Industry leaders, public sector specialists and academia played a role in mentoring the hackathon participants. Both the Minister and the Deputy Minister expressed their gratitude to the mentors and judges.

At the end of the Hackathon, Deputy Minister Chana Pilane-Majake, announced the Top 3 teams to be awarded during the Public Sector Innovation Awards Ceremony later in the evening.  The top three teams were:

Winner: Team Hack-A-Ton consisting of students from the University of Johannesburg came first with their agricultural solution, Agr-Ecco, that matches farmers to potential sectors, markets and necessary resources.

They walked away with a R20 000.00 cash prize. The all-female team also won a combined prize, the “Best Female Geekstar” Award.

First Runner Up: With R10 000 cash prize, Array Technologies developed a fire detection system targeted at informal sectors with high alert mechanisms that seek to prevent the spread of the fires in informal communities.

Second Runner Up: THe Cape Town based team Weza took the third place with a R5 000.00 prize for their crime-prevention solution.

All top 3 teams will be supported through a focused Geekulcha Tech and Market Readiness Programme for the next 45-days, with sector guidance and support from the CPSI.

Teams will also be encouraged to further develop their solutions through upcoming hackathons and support programmes. 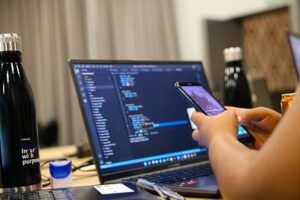 The Official launch of the Call for Entries  – ...

The Official launch of the Call for Entries  – ...